While many holes play right to left, the opening hole presents a dramatic exception.  The wide fairway bends right to a downhill approach inviting the player to keep his shot to the right side of the green where the slope may turn a slightly errant shot into a "green in regulation."

Better players here at BLGC believe the second hole may be the most difficult to par.  It's greatest challenge lies in its length, measuring 468 yards from the back tee.  Only the strongest drives will carry the upslope leaving a short iron to a wide green.  Putts sixty feet and greater are not uncommon here.

The shortest hole on the course is also one of the most beautiful and potentially treacherous.  Be sure to take plenty of club because to be just a fraction short means your ball has found a watery grave and you'll play your third from the drop area left of the green.

The first par five on the course flows gently from left to right. Staying left of the bunkers off the tee opens up the hole for a "go at the green" or a measured lay-up leaving only a short pitch to the hole.

Every course should have a hole like this, a par four that is reachable from the tee.  But don't go left.  It doesn't take much of a pull to send the ball careening into the woods, splashing into a bunker or settling into high grass well below the putting surface.  There is however, plenty of fairway to the right where a more conservative shot will yield a short and open approach.

This medium length par four calls for a tee shot to the right of center setting up a short second to a very deep green.  Pay close attention to the colored flag because the resulting uphill shot to a back pin position may require an extra club and then some.

This is the sort of hole John Daly must have pictured when he uttered his now famous phrase, "Grip it and rip it!"  For those who feel compelled to play from the tips, say hello to 600 yards of Scottish links style par five.  Avoid the bunkers on the left by aiming at the distant bunkers on the right.  Stay a little right on your second shot and this bohemoth of a hole might still produce par or better.

It's the longest par three on the course but the eighth plays downhill to a land that sand forgot.  The only real concerns here are the deep collection area right of the green and the thick, wiry grass to the far left.

If you're playing number nine for the first time, a direct line from the tee to the flag on this unimposing par four may seem like the way to go.  But know this: the tall grass to the right has become the golf ball graveyard at BLGC.  The direction post at the 150 yard mark may look to be too far left but hit it there and you can't go wrong.

You can't go wrong with a straight shot directly over the direction post...except here at number 10.  That shot, or one even slightly to the right, can invite serious trouble because a well struck drive can run through the fairwayinto the woods or at least into a position where a player's approach is blocked by the trees.  There are bunkers guarding the left side but a second from the sand is much preferred over no shot at all.

This is one of only three holes on the course where water comes into play.  Be bold and the green can be reached in two but even the slightest pull on the approach can find the large pond that guards the left side of the fairway from 100 yards in.  The high-banked right side of the green will tend to feed approach shots down tot he middle of the putting surface.

This long par four will play much shorter for the player who can keep his tee shot to the left of center over the bunkers.  Catch the downslope and enjoy the considerable roll and extra yardage that will result.  From there the green opens up for a straightforward second.

It's deja vu all over again here at #13.  It's another long, sloping dogleg left that plays much shorter with a drive left of center.  On your way to the putting green there's a right side bunker laying about 40 yards short of the putting surface.  Carry the sand and even a shot which falls a little bit short of the target may get a friendly bounce into birdie territory.

At the end of the long, scenic ride across Belmont Lake, you'll come to the forst par three on the back side.  Number 14 is a slightly downhill, well bunkered hole measuring 195 yards from the back tee.  The green slopes fairly dramatically from back to front and the only reasonable chance for birdie is a tee shot which comes to rest below the hole.

This short par four turns gently left with bunkers in front and to the left of the green.  Best to keep the driver in the bag here since you don't need prodigious distance off the tee to have a wedge in your hands.  A rear pin position, however, requires a measure of precision because this particular green slopes front to back and many players are surprised to discover they've ended up over the green.

This picture postcard par 3 is guarded in front by a large pond and a couple of strategically placed bunkers.  There's no mystery here.  Check your ego at the door and make sure you have taken enough club.

Welcome to another short par four.  The fairway bunker on the right comes into play but there is no more room to the left than what you see from the tee.  Once again, the big stick may not be your best friend here because a long drive down the middle will likely result in a severe downhill lie.  The green is not very deep and any shot that carries over the back is... how do we say it in golf... dead.

The finishing hole at Belmont lake Golf Club rewards all the length you've got.  The best second shot on this straight par five will carry a row of three bunkers that stretch across the left side of the fairway.  Big hitters can "get home" in two.  But even if you don't, that shot which carries the bunkers will land on a downslope and the bal will roll down to a spot where you're chipping for eagle. 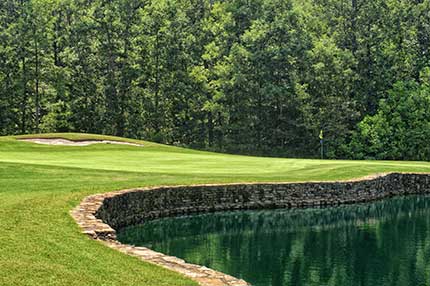 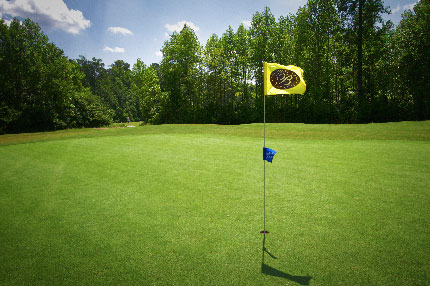 See All The Deals! 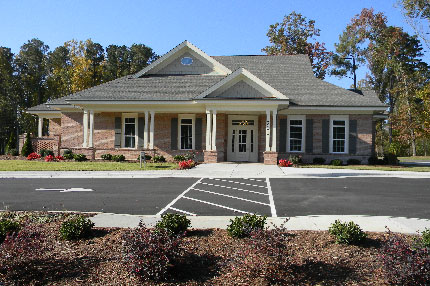